The most exciting and unexpected saltatory innovations arise precisely because they are less a process and more a singular inventive event. True to Szent-Györgyi's dictum it is imagining something no one else imagined and acting on it. In a world of shrinking switch opportunities saltatory inventive innovations must be encouraged.

One of the earliest adopters of organized inventive innovation was P&G. In 1952, just prior to its first launch into the OTC space with Crest toothpaste, P&G opened Miami Valley Laboratories, an entire research campus of 1,450 labs and offices dedicated to upstream research into its diverse business sectors. However, by 2000 the effectiveness of an internal long-range innovation resource was gradually replaced by "Connect & Development" an outward looking open innovation model championed by AG Lafley, Larry Huston and Nakil Shakab in the early 2000's. Thus, a shift towards an acquisitive model that has since blossomed across the sector. Many other multinationals have since followed. Nonetheless, short and mid-term product development must still rely on inventive concepts and application of new technology.

Richardson-Vicks launched its Vicks cough syrup in 1952. In 1960, two years after the FDA approval of OTC dextromethorphan, Vicks Formula 44 cough syrup emerged at Richardson-Merrell, the progenitor of Richardson-Vicks. Syrups were the long preferred vehicles for treating cough. Now defunct, the seminal version of VF-44 was affectionately called "motor oil" as it was a thick unattractive medicinal brownish liquid loved by many who sought "strong" relief. It is also believed that this was a standard practice to prevent product abuse. The 1960's marked the emergence of branded cough product lines, particularly so the Vicks lineup.

The adjacent common cold category in the 1960's next experienced inventive breakthroughs marked by the emergence of rational branded multisymptom relief (MSR) products. Contac® was trademarked by Smith, Kline & French in 1961 with its revolutionary "tiny time pills": visible colored-coded time released granules in a clear gelatin capsule each color containing a different ingredient highly suggestive of an ethical heritage. Soon thereafter Nyquil was invented and trademarked by Richardson-Vicks (RVI) in 1966. Much of the inventive credit for the Nyquil concept goes to the late George Hoffnagel and Chet Poetsch, VP R&D, working out the small RVI R&D lab in Mt. Vernon, NY and the plant in Greensboro, NC. In this era when colds medicines were solid dose forms they realized that a medicine to relieve colds could be a liquid containing a variety of ingredients each targeting a cardinal colds symptom — a novel concept at the time since liquid OTC's were understood to be cough syrups. Thus, a new segment of the cough/colds category was born: liquid multisymptom relief products for colds. The original formula contained: ephedrine [decongestant], doxylamine [antihistamine], acetaminophen [analgesic], dextromethorphan [antitussive], and 25% alcohol [50 proof] in a licorice (anise) flavored vehicle. A similar core formula still exists today as Nyquil Severe® however in the intervening 50 years the alcohol level has dropped to 10%, the decongestant has gone through several revisions, and a cherry flavored sku was later added in 1987. Not only was the original product design new, but so too was the benefit statement. Initial launch advertising stressed the importance of rest evolving ten years after launch to the familiar Nyquil litany of symptoms relieved "so you can rest medicine". This innovative vision of both product design and a novel, compelling benefit statement has stood the test of time for over 50 years creating a robust segment of liquid colds products still dominated by the originator. P&G acquired this innovative brand in 1985-86 after 20 years of success at RVI expanding its sales greatly. 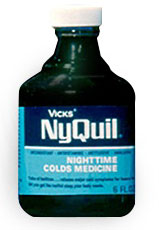 What insights in the 1960's made the original Nyquil product concept inventive?

During this pre-monograph period Contac® and Nyquil® were the inventive product concepts that ushered in the modern era of rational multisymptom solutions to common respiratory problems. Importantly this transition from an era of unregulated and unproven proprietary products to safe and effective ones did not depend on acquisitions, but on raw inventiveness. Given that the monograph process would soon begin in 1972 these products would become important role models submitted into the coming federal regulation. Richardson-Vicks would spend the next 20 years working to insure their final monograph inclusion and compliance.

Dr. Riker is a proven innovator having identified, recommended and initiated new product development in the consumer healthcare industry as a senior corporate manager of technology, an entrepreneur and an investor. Dr. Riker invites inquiries on working together to accelerate product innovation.

Product Concepts Before Their Time: An Intellectual Capital Asset?

Those of us in the consumer business have seen product concepts come and go often to be rediscovered by new brand managers. The time...

As discussed previously acquisitive innovation is the act of acquiring assets that are partially, or wholly, developed outside the...

The most exciting and unexpected saltatory innovations arise precisely because they are less a process and more a singular inventive...